On September 6, the German Polarstern expedition PS100, named GRIFF (Greenland Icesheet/ocean Interaction and Fram Strait Fluxes) arrived in Tromsø. It had successfully completed the GEOTRACES section cruise across Fram Strait (GN05), the only deep water connection between the Arctic and the World Ocean. By “closing” this last gateway, this section completed the International Arctic GEOTRACES field programme 2015/2016, which consisted of four cruises from Canada, Germany and USA. Measurements in the shallower gateways, the Bering Strait and the Canadian Archipelago, had already been made in the 2015 expeditions.

Main objective of the expedition was to study the interaction of recirculating warm Atlantic water with the large 79°N glacier (North East Greenland Icesheet, NEGIS), and the GEOTRACES team investigated whether this interaction leaves an imprint on the composition of trace elements and isotopes in the water masses around Greenland. First objective of this GEOTRACES section GN05 was to quantify differences in composition between the northward flowing West Spitzbergen Current and the southward flowing, mostly ice-covered East Greenland Current. A second objective was to estimate import and export fluxes of trace elements and isotopes between the Arctic and World Ocean through this major gateway, to be done in close cooperation with physical oceanographers. With this aim, a total of 30 stations were sampled across Fram Strait by a team of 15 GEOTRACES scientists from France, Spain, Germany, United Kingdom, Switzerland, Sweden and the Netherlands. 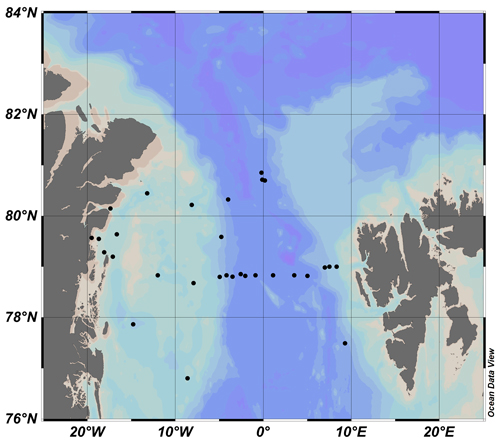