When flowing in the South-West Pacific and through the Solomon Sea, water masses entering in contact with the coasts undergo dynamical transformations as well as nutrients and micronutrients enrichments. This impacts the productivity of the Equatorial Pacific Cold Tongue and therefore its climatic role. Trace elements that are injected from these “boundary processes” provide key information on mixing processes. Establishing the distribution of these elements and quantifying these land/ocean inputs is a priority of the international GEOTRACES program.

The main objectives of the French Pandora cruise (GP12 GEOTRACES section) that sailed in the South-West Pacific and through the Solomon Sea from June 27th and until August 7th (Nouméa-Nouméa, R/V Atalante) were: to provide a quasi-synoptic description of surface and subsurface circulation in the Solomon Sea and in the straits connecting that sea with the equatorial circulation, based on both hydrological and geochemical parameters; to deploy a series of moorings in the straits to obtain the temporal variability of the circulation; to evaluate water masses transformations and mixing; to document water/margins exchanges. 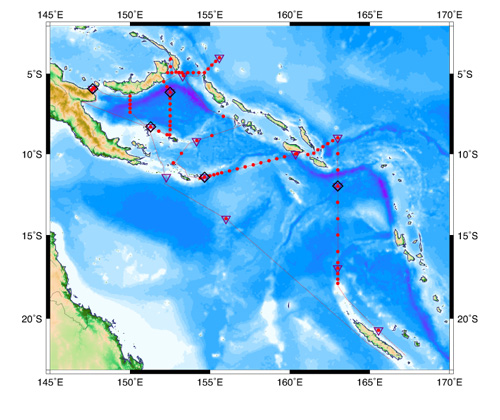 During the 40 days at sea, the Pandora team composed of 28 researchers, engineers and students from 5 countries (France, USA, Fiji, Papua New Guinea, Togo) successfully occupied 83 stations. 134 casts were obtained with a regular sampling system, 30 with a clean one and 6 ISP profiles (one down to 5500 m in the center of the Solomon Sea) were realized. In addition, 11 moorings were deployed in the different straits for 18 months, to record the temporal variability in the water veins entering and exiting the Solomon Sea. At all stations where the clean sampling system was deployed, samples collected with Go-Flo bottles were clean filtered on Nuclepore membranes. Other samples (for Th, Nd isotopes…) were collected on the regular rosette and filtered on Supor membranes using pressured clean-air in close containers. In addition to collecting GEOTRACES core parameters, samples dedicated to the 4 radium isotopes, 7Be, 227Ac or to the measurements of Pb, Cu, or Zn isotopes were also taken. All included, the Pandora harvest will allow documenting more than 100 parameters at these different stations.