The 2015 US Arctic GEOTRACES initiative participated in a novel outreach project coordinated with Dave Forcucci (US Coast Guard Marine Science Coordinator) to involve students and the public with an Arctic research cruise on the US Coast Guard ice-breaker Healy. GEOTRACES was a perfect match for the inaugural kick off of “Float your Boat” < https://www.facebook.com/explorethearctic/>. Over one thousand 8-inch (20-cm) long cedar boats, were commissioned (funded by the National Science Foundation) from the Center for Wooden Boats (CWB.org) in Seattle, WA and distributed to school groups, scout troops, and science open-house events around the country. Students personalized their boats with bright colors and after returning to Seattle the boats were branded with floatboat.org and packed into the hold of the Healy for the journey to the North Pole. During the GEOTRACES cruise, four groups of boats were deployed on ice floes between 87.5 N and 80 N on the 150 W meridian, each with a small satellite buoy (deployed by the University of Washington Applied Physics Laboratory to study ice movement). The iridium satellite-linked buoys provided an opportunistic chance for high resolution, real-time tracking of the boats for about a year and a half. After drifting with the Arctic ice, it was hoped that the boats would eventually be freed from its grasp and float to a distant shore to be discovered and reported. This project is described by our teacher-at-sea, Bill Schmoker, at https://www.polartrec.com/expeditions/us-arctic-geotraces/journals/2015-09-16 and by Prof. Timothy Kenna, the scientitst who was in charge of deploying the boats: https://blogs.ei.columbia.edu/2015/09/21/arctic-magic-one-research-vessel-multiplies-to-hundreds/ .

Figure 1. Left and middle: The recovered boat, showing the effects of three years of weathering. Right: the boat in its original condition. Below: Mr. Bollie Thor with the boat, in Iceland. 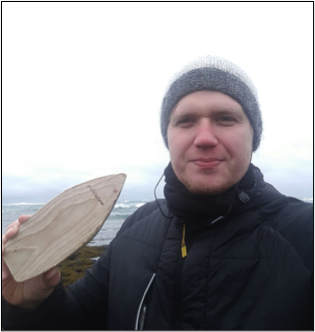 In October 2018, three years after deployment, one of these small wooden boats was found by a gentleman in Iceland, Bolli Thor. He wrote: “These are the coordinates 63.962285, -22.734055 where I found one of your little wooden boats, near small town called Sandgerði in Iceland where I live. I found it at my favorite spot, where I usually walk with my dog called Tyra.” The recovered, weathered, boat is shown in Figure 1. Remarkably, we identified the pre-deployment picture, the student and school (Upper Nyack Elementary School).

The recovery site is shown in Figure 2. The drift track data stopped in February, 2017. Two groups of boats ran aground in northern Canada, while two groups, deployed near the N. Pole, were entrained in the Trans Polar drift and traveled south, through Fram Strait, into the E. Greenland Current (Figures 3 and 4). A boat from these groups made it to Iceland. 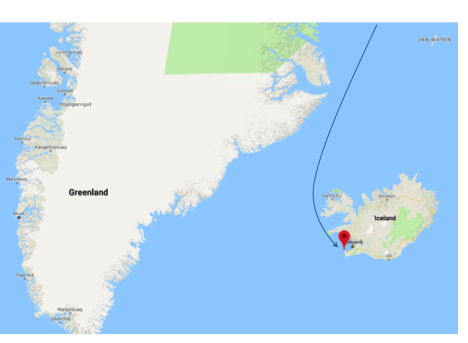 Figure 2. The location, Sandgerði in Iceland, where the boat was recovered. 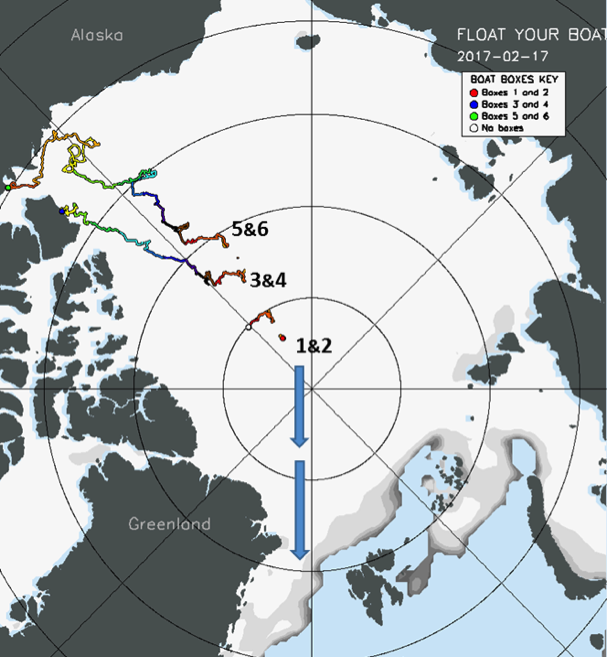 Figure 3. The map shows drift tracks of our small boat deployments. Boxes 3,4,5,6 ran aground in northern Canada in February 2017. Boxes 1 and 2 were entrained in the Transpolar drift and went south. The boat discovered in Iceland was in that group. 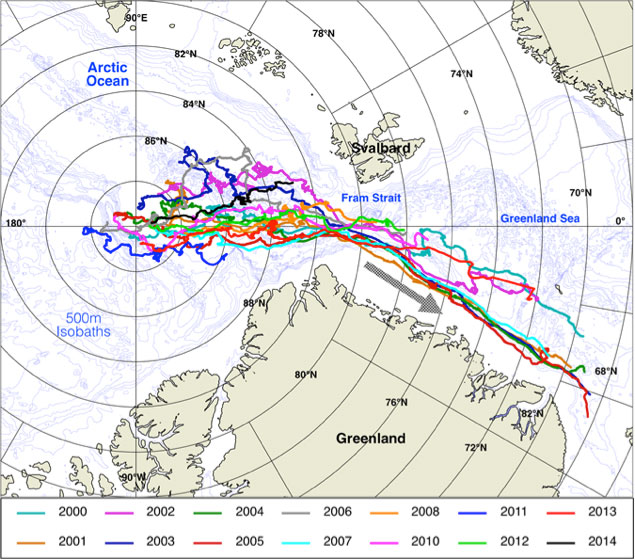 Figure 4. The map shows historical drift tracks of data buoy clusters from the NPEO (North Pole Environmental Laboratory) main deployment camp near the North Pole each April 2000-2014 toward the North Atlantic for as long as they continued transmitting.  The Arctic Ocean’s Transpolar Drift exits the Arctic Basin by its only deep-water channel through Fram Strait just east of Greenland. A buoy deployed in April near the Pole has a high probability of following that general route to reach the central Greenland Sea by the following mid-winter.

Distributed on behalf of Dave Kadko, chief scientist, and Bill Landing, co-chief, of the US GEOTRACES Arctic cruises.
You can also read the new item published on the Florida State University web site: https://news.fsu.edu/news/science-technology/2018/12/04/toy-boats-arctic-ice-and-a-science-outreach-success/

This project has been featured  in the Witness the Arctic – Fall 2019 Issue: https://www.arcus.org/witness-the-arctic