More than 60 scientists (including students and post docs) representing 30 TEI groups (trace elements, isotopes and supporting variables) assembled 11-15 March 2013 at Old Dominion University (Norfolk, Virginia) to examine the results from the US GEOTRACES North Atlantic section (GA03). Members of the US GEOTRACES Scientific Steering Committee met concurrently with the data workshop to assess the overall performance of the expedition and to make recommendations for future US GEOTRACES cruises. 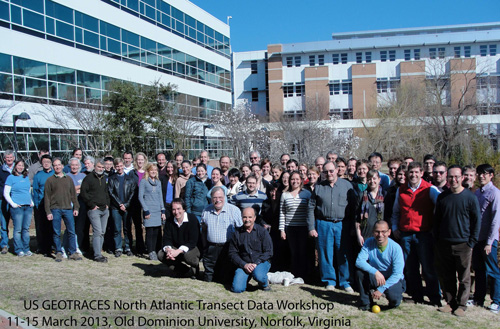 The first two days of the workshop were devoted to presentation of results by each group, after which participants broke into working groups to compare results pertaining to specific processes (e.g., particle transport and mineral aerosols, boundary exchange, benthic nepheloid layer processes, sources and sinks associated with the hydrothermal plume, transformations across the chlorophyll maximum, oxygen minimum zone processes). Workshop participants repeatedly returned to questions about hydrography and ocean circulation in the context of interpreting TEI distributions, and developed a plan for optimal multiparameter analysis to characterize contributions of various end-member water masses and their respective supply of TEIs along the section.

An important aspect of the workshop was attention to the ongoing intercalibration process. In addition to crossover stations with other cruises, multiple US labs measured certain TEIs, especially at “superstations” (e.g., as many as 5 labs measured dissolved Fe at selected stations). Careful examination of the results indicated that whereas agreement was generally good, thanks to previous intercalibration work, some analytical issues remain unresolved. These findings emphasize the critical importance of sustaining intercalibration efforts on all GEOTRACES cruises to ensure high quality of the global data set.

The true potential of the GEOTRACES philosophy was realized as investigators compared results for different TEIs and supporting variables when interpreting the processes affecting TEI distributions along the section. For example, within the “margin section” between Mauritania and the Cape Verde Islands, iron isotopes, radium isotopes, circulation tracers, nutrients and oxygen were combined with distributions of a suite of trace elements to discriminate between dust and boundary exchange with margin sediments as a source of iron and other TEIs. Workshop participants identified a number of synthesis topics like this to be developed for publication over the next year or so.