The GRIFF cruise (Polarstern PS100, GEOTRACES section GN05) will depart from Tromsø on July 18 and return to Tromsø on September 6. Onboard the German research ice breaker Polarstern there will be 48 scientists from 10 countries (Germany, Canada, South Africa, Netherlands, Portugal, United States, Sweden, Switzerland, France and United Kingdom). Among the participants, a team of 15 scientists will carry out the GEOTRACES program.

The cruise “Greenland ice sheet/ocean interaction and Fram Strait fluxes” (GRIFF) combines investigations of the oceanic fluxes across Fram Strait with ice sheet-ocean interaction studies near Greenland. The marked temperature increase in the Arctic, considerable changes of the Arctic fresh water budget during the past years, the retreat of the Greenland ice sheet, and changes in ocean circulation have been linked there via complex interactions. The GRIFF cruise will bring together scientists from different disciplines to gain a deeper understanding of these recent changes.

Fram Strait constitutes the only deep gateway between the Arctic and the global ocean, through which warm saline Atlantic waters flow northwards. At the same time, a substantial part of the huge Arctic fresh water excess is carried southward towards the Atlantic, partly as liquid water and partly as sea ice, thereby modifying the chemical and physical properties of the entire Atlantic Ocean. In the Nordic Seas, this fresh water flux is augmented by runoff (and ice bergs) from Greenland. In deeper layers of Fram Strait, deep and bottom waters that are ventilated by polar processes exit the Arctic to be eventually incorporated in the Atlantic meridional overturning circulation. One of the mightiest Greenland ice streams, the NEGIS (North East Greenland Ice Stream), drains into the western Fram Strait. There, its outlet glacier, the 79°N Glacier, is in direct contact with warm Atlantic water recirculating in the Fram Strait, which has been warming considerably during the last decades. Climate models predict further warming with possible consequences for the stability of the NEGIS.

The GRIFF cruise will combine work on ocean circulation, geochemistry, glaciology, geodesy, geology, geophysics, mechanical engineering, biology, and biochemistry of this complex system. The volume and heat fluxes through Fram Strait will be quantified by a continuation of the long-term mooring and hydrography programs. The hydrographic section work will include the entire suite of core trace elements and isotopes run by the GEOTRACES program, constituting section GN05. In combination with the oceanographic transport measurements and with the pan-Arctic GEOTRACES program carried out in 2015 (including the Polarstern TransArc II cruise, GEOTRACES section GN04), the results of this cruise will enable us to estimate the Arctic contribution to the global trace element cycle, and to eventually close the Atlantic budgets in the North. On the other hand, the trace elements will help to identify the sources of the various water masses flowing across Fram Strait including contributions from basal glacial melting.

GRIFF is also a component of the strategic infrastructure program FRAM (FRontiers in Arctic Monitoring) of the Helmholtz Foundation of German Research Centers. 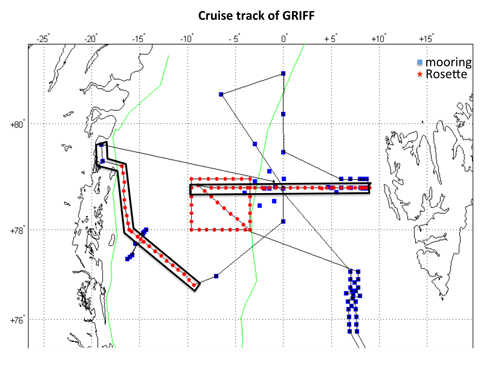 Figure: Planned cruise track of GRIFF with moorings (blue squares) and water sampling (all stations).
GEOTRACES stations (GN05) will be selected from the stations in the black frame. Please click here to view the figure larger.

The cruise program can be found at:
http://epic.awi.de/41157/1/PS100_Expeditonsprogramm.pdf