Data management is not a glamorous role. Even in a field like oceanography, which has generated large multi-disciplinary datasets and relied upon them for important scientific work for decades, the data managers tend to toil in the background and are rarely acknowledged. Their world is filled with dealing with different types of data spreadsheets, converting between file formats and the chasing down of units and methods, all while trying to meet the demands of their scientific community.

Today we would like to take the chance to acknowledge Chris Daniels, a data manager who made an important contribution to the GEOTRACES community and has sadly passed away in November 2018 at the age of 31.

All us are proud of the 2017 data product that GEOTRACES released, but those of us involved in the planning and execution process know that it was an enormous effort. A crucial part of this is how data sets from all over the world, concerning hundreds of parameters are assembled at the GEOTRACES Data Assembly Centre (hosted at the British Oceanographic Data Centre in Liverpool). Only with this synthesis effort is it possible to realise the ambition of a multi parameter, fully integrated dataset like the IDP.

When we moved from the IDP2014 to IDP2017 the number of different parameters and datasets increased dramatically, and our existing methods of work were feeling the strain. Chris joined the GEOTRACES effort in January 2017 and was tasked with thinking about how to approach this emerging challenge and the leadership this would require. Sadly, Chris became ill shortly afterwards and was unable to return to work to complete the task himself. However even in this short time, he brought into place a new approach, with a dedication and enthusiasm to deliver what the community was looking for.

Chris had interests outside of his role within GEOTRACES, which was only ever planned as a stepping stone along the road to a fulfilling academic career. During his PhD and postdoctoral work he was a valued member of large UK projects such as Ocean Acidification and Shelf Sea Biogeochemistry. He was especially passionate about coccolithophores and was considered to be a bright emerging young scientist with an exciting future ahead of him.

We express our sadness at his passing at such a young age and send our sympathies to his family, friends and colleagues. In particular, we take this opportunity to reflect on how fortunate we are to meet unique and talented people like Chris in our daily work. Today, we work on towards new scientific challenges and discoveries in his memory.

If you would like to make a donation in memory of Chris, his family has suggested Hearing Dogs for Deaf People, a charity with which Chris and his family are heavily involved:  www.hearingdogs.org.uk/donate/ 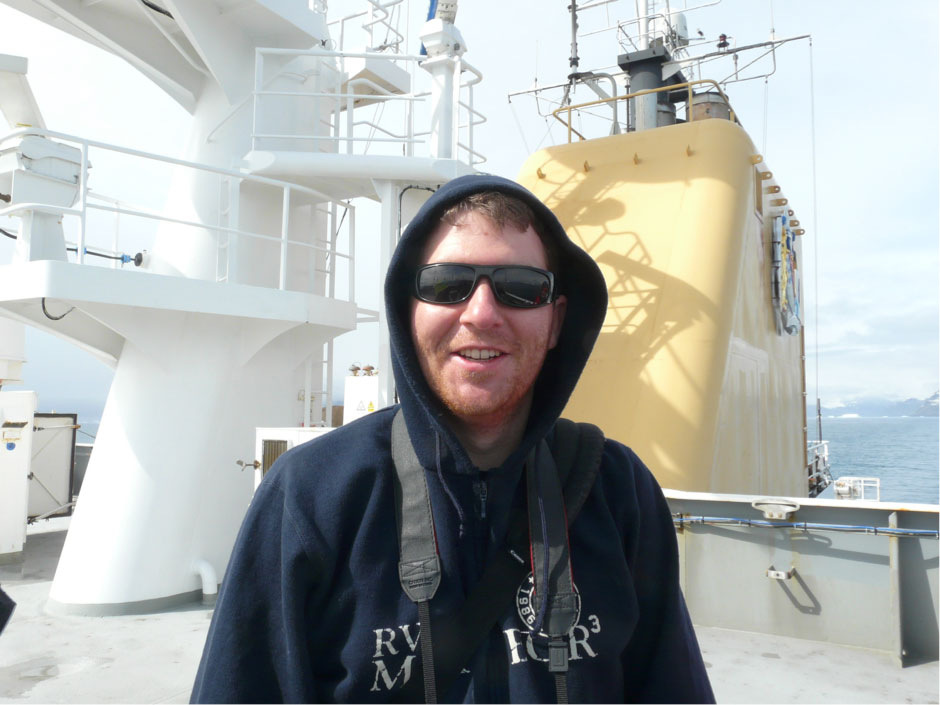 Chris aboard the RRS James Clark Ross steaming out of South Georgia during the one of the UK Ocean Acidification cruises in 2013 (photo by Mark Moore).